Cuba and The Classic American Car 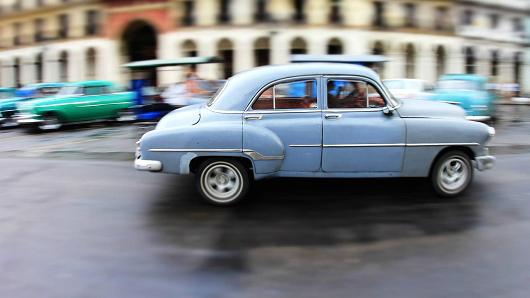 Classic American Cars driving around Cuba may seem like a movie cliché, but the anachronism exists for a reason.

You’ve probably seen a multitude of television shows and movies that depict life in Cuba as some sort of retro landscape with dozens of products taking you back to the 1950s and 1960s. Despite the embellishment, there is some truth to it, specifically in regard to the Classic American car.

How did it happen?

Cuba placed an embargo on the United States in 1962. Before that American car companies were still able to import their automobiles into Cuba. Once Castro imposed the ban, people could only obtain cars from the Cuban government. At that point, the governments revenue streams weren’t doing so well, so they couldn’t even afford to import cars en masse from European countries or Asia.

Recently, the embargo that has held back the flow of U.S. products into Cuba has been lifted. You’d think that with the ban gone, you’d see a lot more classic car enthusiasts finding their way down to Cuba to check out the goods…unfortunately, that doesn’t seem to be the case.

It appears that the governments limited ability to provide quality automobiles has contributed to this. American classic car collectors have found that a lot of the old 1950s and 1960s models have not been taken care of and have fallen into disrepair. There’s even talk that some of these classic cars have been rigged with duct tape and bailing twine.

This effects the overall value of the classic car because collectors want models with the original parts in them, not something that’s been cobbled together.

An example of how this “cobbling together” affects the value of the car was provided by Steve Linden who is a professional appraiser of collectible cars. He said, “a quintessential American car like a 1957 Chevy Bel Air four-door sedan, in perfect condition with original parts, could sell for as much as $50,000. The same model in Cuba, with a large dollop of Bondo body filler and substitute parts, would probably sell for only $5,000.”

Though the opening up of Cuba bodes well for some U.S. companies, collectors or those looking to re-sell classic cars are going to find themselves disappointed.